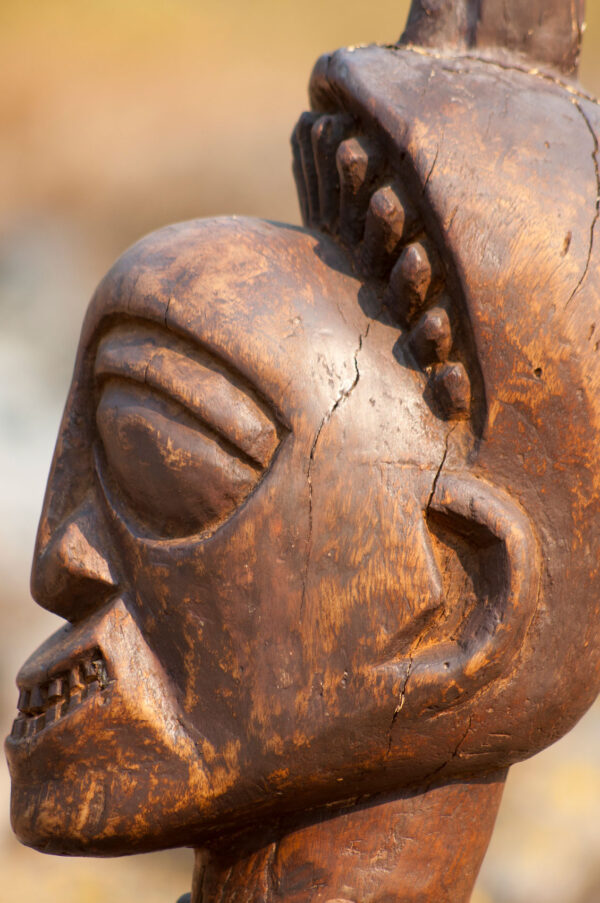 This is a powerful Songye Nkisi fetish figure from central Africa.

Impressively large statue which is 36 inches in height, 7 inches wide and and 8 inches deep. Heavy.

Overall Condition is good but with some age related cracks in the head, left shoulder, and buttocks. Insect damage on the feet. The prominent horn has been repaired and shows some surface wear. Very solid and stable despite these minor issues.

Carved from a heavy wood in the Democratic Republic of Congo (formerly Zaire) — with pigment, vegetal fibers, nut shells, and leather additions.

The Songye as well as the neighboring peoples of the Congo region (such as the Bakongo or Kongo), use ritual art to master the threats and demands of everyday life. The diviner or animist shaman is known as the Nganga. These individuals use their command of rituals and secret formulas to heal and protect the community from witches and other malevolent forces.

Sculpture like this are known as Nkishi or Nkisi (the plural is Minkisi or Mankisi) and serve to control and direct the magical forces and attract the attentions of the spirit world. Among the Songye and other Bantu language speakers, sculptures such as this Nkishi serve as the contact point between the spirits and the Nganga; it is locus where the ritual activity of the Nganga meets the unseen spiritual powers that govern the cosmos.

This figure has a prominent belly instead of an opening in the stomach which would often have housed magical material known as bishimba. Large figures like this one are used for community shrines. An impressive and well-carved sculpture such as this one can add to any serious ethnographic art collection.

The Songye and Kongo people used Minkisi for curing illness, punishing criminals, combating witchcraft, and solving community problems. Some minkisi were called on to unleash punishments on social offenders, but others were understood to bring only bounties to the community. The specific form that a Nkisi takes is less important than the medicine created for its use, but the visual impact of a skillfully rendered figure such as this object adds to its ritual power.

During the late 19th and early 20th centuries, Portuguese, French, and Belgian colonizers seeking control of the Kongo region encountered Minkisi as weapons of resistance. Missionaries coerced or stole them from communities to remove their perceived pagan influence, often destroying the figures. Colonial military commanders captured the figures to crush local empowerment and resistance. Many of the Minkisi now found in museum collections were purloined from Africa during this period of colonial invasion.

Today the beliefs that underlie the use of Minkisi remain prevalent in the region although they no longer take the elaborate figural forms of the past.

Shipping is $55 within continental U.S.