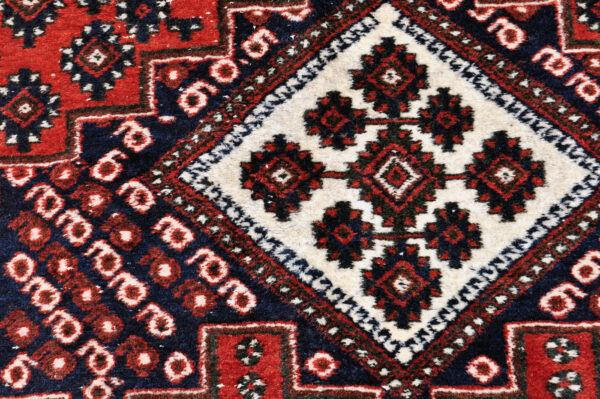 The rug has been professionally washed.

Some scattered wear but generally the rug is quite solid with good pile. The worst area of wear is shown in the second photo. Fringes and side cords are in very good shape.

The dyes are natural and there are no problems with ‘bleeding’ (dye runs) or excessive fading from sun exposure.

The rug is woven from natural wool and natural cotton. The field is filled with small icons and boteh figures.

Last photo with silver dollar shows the back.

A wonderful example of a traditional antique Afshari rug for an appreciative collector.

The Afshar tribe has a remarkable history, and its weavers create some of the most beautiful village rugs in Iran.

“The Afshar, also spelled Awshar or Afşar, are one of the Oghuz Turkic peoples. These originally nomadic Oghuz tribes moved from Central Asia and initially settled in Iranian Azerbaijan, later being relocated by the Safavids to Khurasan and Mazandaran. Today, they are variously grouped as a branch of the Turkmens or the Azerbaijanis.

Afshars in Iran remain a largely nomadic group, with tribes in central Anatolia, northern Iran, and Azerbaijan. They were the founders of the Afsharid and Karamanid dynasties.
Nader Shah, who became Shah of Iran in 1736, was from the Qirqlu tribe of Afshar.”

Shipping is $43 within continental U.S.

Please email me with question. Thank you.