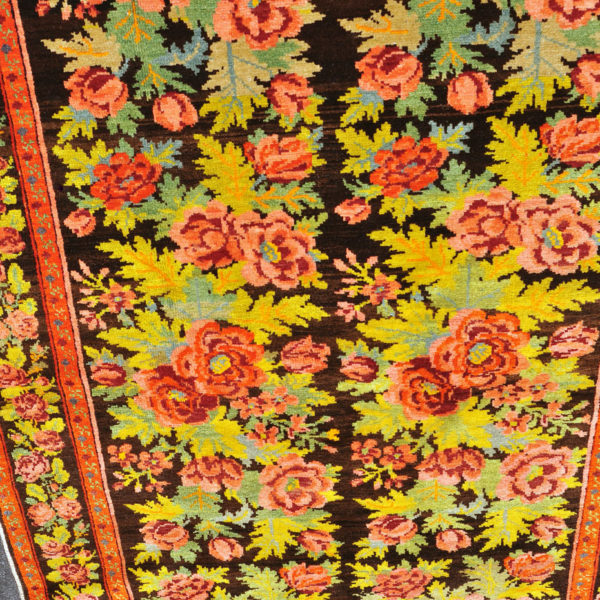 Astoundingly vivacious floral runner from the Karabakh Caucasus region of Armenia and Azerbaijan.

The condition is very good with minor wear on the cotton fringe and side cords. The exact size is 9 ft. 7 in. by 4 ft. 6 in. Natural wool woven onto cotton warp.

Intense yellow-gold foliage with orange-red, salmon, and burgundy roses on a black field. Light sage and olive green leaves, with a deep orange double border. Colors are vivid and saturated.

Soviet era rug from either the Armenian or Azerbaijan Soviet Socialist Republics. 1960s.

Antique and vintage Karabakh rugs are highly sought by collectors and designers. The region maintains one of the oldest and most diverse weaving traditions in all of the Caucasian mountains. Many are descended from the classical Caucasian carpets of the eighteenth century; others are closely related to Kazaks, with large medallion patterns and a tribal geometric sensibility.

Still others, such as this runner, display naturalistic floral ornamentation inspired by the Aubusson and Savonnerie carpets of France. More often you see this floral style reproduced in the Bessarabian kelims of the trans-Caucusus, Bulgaria, Moldova, Yugoslavia, et al.

Karabakh rugs represent some of the best quality and design among the rich textile weaving traditions of the Caucasus. Woven in the south-eastern Caucasus, they neighbor the Kazak district, the Shirvan production region, and the rich traditions of north-eastern Iran.

The geography of the Karabakh region contributes to the rugs falling into multiple design categories: the village carpets similar to geometric Kazaks; the urban rug influenced by classical Persian style; and Russian designs  often appealing to Western tastes and sensibility.

Karabakh rugs can feature medallions such as ‘eagle kazaks’ and ‘cloudband kazaks’ as well as more curvilinear motifs. Often they are pictorial and include people and animals including cats and dogs; others, such as this runner, display a naturalistic French style related to Aubusson and Savonnerie floral motifs.