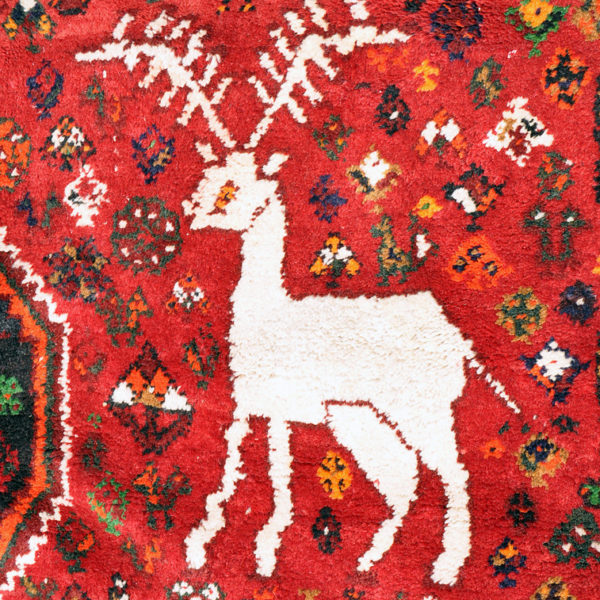 A geometric rug woven with great attention to an array of intricate figurines and emblems. In the middle of the rug the center medallion is defended by a pair of orange lions with upraised swords. These lions are powerful symbols of Persia and Iran, and were used extensively throughout the 19th century. Often the lion is depicted with a rising sun behind it, and this symbolism dates back 2500 years to the religion of Mithra. (See info below)

Balancing the lions are a pair of large white reindeer. The entire main red field, shaped like a diamond, is covered with traditional Qashqai birds, icons, and tree of life designs; enclosing the red field is a quartet of black triangles also filled with a myriad of woven figures.  The central medallion holds a traditional Qashqai motif, which is matched by identical motifs in each of the black corners. An elaborate border–including lozenge shaped medallions or cartouches woven on an ivory white backdrop–adds another powerful visual layer to the rug.

Thick and heavy rug woven of all natural wool, including warp and weft. Good overall condition with some minor wear, mainly in one border area. There is also some minor dye diffusion into small areas of the white border. Very heavy and solid and could be placed in a high foot traffic area without concern.

Out of my personal collection, and I’ve been collecting Qashqai carpets for over two decades now. Although based on traditional Qashqai iconography, this is unique in regard to its large size and impressive imagery.

Fantastic tribal art for your floor!

More information on the origins of the lion and sun icon in ancient Persia:

“The oldest surviving Lion and Sun emblem in its’ early form, date back to the reign of King Artaxerxes II (436-358 BCE). The Achaemenid seal depicting king Artaxerxes (a Mithraist), honouring Goddess Anahita who is riding on a lion and sun is rising from the lion’s back.

The lion motif dates from ancient times in Iran, and is found on innumerable objects of daily use such as seals, vessels, horse equipment, and weapons and in the decoration of palaces, tombs, and temples as far back as the 3rd millennium BCE. Lion has been one of the most persistent iconography in Iranian art and religion, albeit with changing connotations.

Since the ancient times lion motif has a long tradition in political iconography and has always been used for the glorification of imperial power with well-known occurrences in artistic enterprises related to strong monarchic territorial structures in Iran; In literature, art, stories, and the social-life of the Iranians, lions have always been the symbol of power, courage and greatness. Iranian Kings and noblemen have demonstrated their greatness and glory through illustrations of lions on coins and swords.

In ancient Iranian religion of Mithraism, lion was connected to the sun and to fire and was perceived as a moral cleansing and purifying force, and it was the Sun God Mithra’s ‘totem’ animal, just as in the Greco-Roman culture Athena’s animal was the owl and Artemis’ animal was the deer.”

Please email me with questions or to arrange a puchase. Thank you.

This is an extremely thick and heavy rug; shipping is $69 within continental U.S.