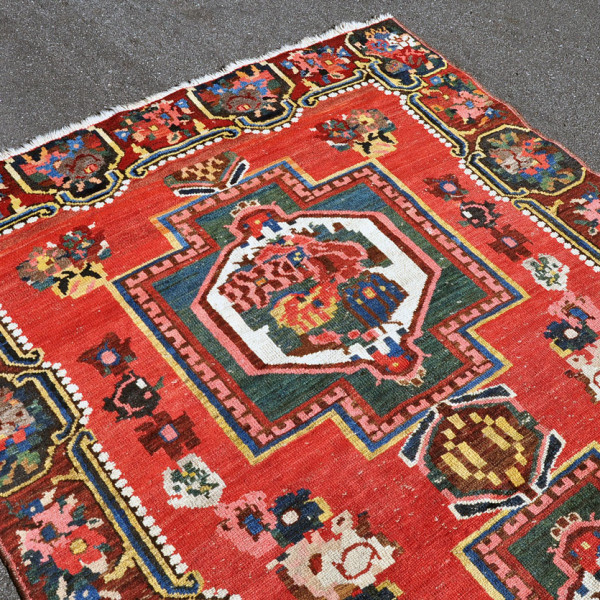 Gorgeous vintage Bakhtiari Faradonbeh rug. Faradonbeh is a small town in the Chaharmahal and Bakhtiari province in western central Iran. The Gol Farang is a signature design of this town. Usually they are woven as runners so nice to find it in these dimensions.

Wonderful red field with tans, golds, and a blue-green medallion. Also salmon, blue, and white. All dyes appear to be natural and there is a modest amount of abrash (color variegation due to different dye batches). Pile has been kept short to showcase the marvelous motif.

Condition is good with scattered wear and a few white knot-heads (cotton warp threads peeping through). Despite the minor wear the rug has no holes, weak spots, or issues of concern. (If desired, the knot-heads can be ‘painted’ so they are not visible.)

In Persian and Caucasian Rugs this floral pattern is called the Gol Farang. Also seen as Gul Farang, Goli Farngi, Gol-e Farang, Golfarangi, etc. Gol is Persian (Farsi) for flower and Farang is Persian for Frank in the sense of French. At the time the European Crusaders encountered the people of the Middle East, all Europeans were known as Franks or Farang. It was common for Persians, Muslims and Mongols to call Christian Europe Frangistan.

The gol farang, also gül farang or gul i farang (in Eagleton), Gol-i-Mirza Ali or Gol-I-Frank (in Edwards) literally means ‘foreign flower’. The design goes back to European demand for French Savonnerie and Aubusson designs during the 19th century. It is found in different variants in Senneh, Karabagh and Afshar rugs as well as rugs such as this Bakhtiari. The motif also appears in Bessarabian kilims from former Ottoman regions such as Yugoslavia, Moldova, and Bulgaria.

Since the Gol Farang refers to European flowers or roses —  what makes a flower European in particular? Generally, it is rendered from a perspective not normally seen in Oriental Rugs.

Most likely this village design was not drawn using a ‘cartoon’ (a visual blueprint), but rather executed freely, in an improvised manner.

Please email me with questions or to request more photos. Thank you.