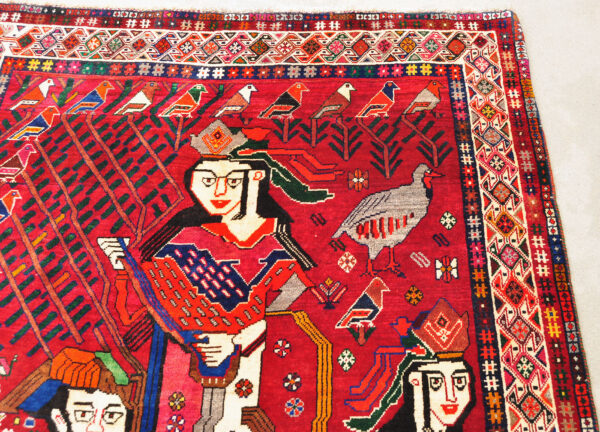 Amazing pictorial Qashqai rug from the Shiraz region of southwest Iran. Signed by the weaver.

Overall condition is excellent with almost no signs of wear.

The barber pole side cords, traditional among the Qashqai, are in great condition. The fringes are also in very good condition. There is a little bit of color pickup in the white of the faces, probably from a wash.

Rugs depicting romantic scenes, wine drinking, musicians, and brokenhearted princesses are often known as ‘Omar Khayyam’ rugs. These carpets are imbued with the poetry and world views of Khayyam, which contrasts with the more ascetic and moralistic religious doctrines of Persia.

The general theme is “wine, women and song” or carpe diem in the European poetic tradition. (Email me if you want any more info on Omar Khayyam inspired carpets.)

The rug depicts a ‘princess’ playing a barbat (lute) with an enthusiastic consort. There are numerous bird and tree-of-life designs across the red field. A woman with a pleased expression (perhaps the musician) is contrasted with a pair of languishing ladies staring into a candle.

As is typical in Qashqai rug weaving, the entire rug, including warp, is composed of natural wool.

Well woven heavy rug that could be used in a high foot traffic area of the home. No holes, thin spots, or weak areas, etc.

Omar Khayyam is one of the giants of Persian literature and poetry. He was born on May 18, 1048 in the city of Nishapoor, which is located in the contemporary province of Khorassan in northeastern Iran. Aside from his writings, he was a polymath who excelled as a mathematician, philosopher and astronomer. As an astronomer he may have developed a heliocentric system with the earth turning on its axis- almost five centuries before European scholars such as Copernicus. Unquestionably, Khayyam ranks as one of the preeminent intellects of all time, and his work remains influential today.

As a student, Khayyam traveled to the ancient educational center of Samarkand. In Bukhara, he composed the era’s most seminal book on algebra. Before the age of 25, he had written several volumes on subjects as varied as mathematics and music.

“Later, Sultan Malik-Shah, the grandson of the Seljuk founder, invited Khayyam to travel to the dynasty’s capital in Isfahan. There, Khayyam established and managed an astronomical observatory. For nearly two decades, Khayyam lived in the city of Isfahan and maintained close connections with Malik-Shah. His astronomical and mathematical works and his contribution to the Jalali calendar are among his most well-known innovations. However, after the sultan’s death, Khayyyam fell from favor and embarked on a pilgrimage to Mecca followed by extensive travels. Khayyam’s life frequently intersects with Persia’s greatest cities, places where pictorial carpets featuring scenes from the Rubaiyat were later created.”

Outside the mathematical disciplines, Omar Khayyam is best known for his quatrains. These evocative poems were introduced to the West by Thomas Hyde in the 17th century, and later by Edward FitzGerald, who translated hundreds of quatrains and presented them with dazzling illustrations. They were titled The Rubaiyat of Omar Khayyam. A ‘rubaiyat’ is a four-line piece of poetry also called a quatrain.

As many of the quatrains celebrate a sensuous and hedonistic embrace of life’s fleeting pleasures, Khayyam is now eternally linked to a ‘party hearty’ mentality, which is certainly ironic for one of history’s greatest mathematicians and astronomers.

“My friend,
Let’s not think of tomorrow,
But let’s enjoy this
Fleeting moment of life.”

“A Book of Verses underneath the Bough,
A Jug of Wine, a Loaf of Bread — and Thou
Beside me singing in the Wilderness —
Oh, Wilderness were Paradise enow!”

There are scholarly reasons to doubt that all the poems attributed to Khayyam were actually written by him. (See ‘Rescuing Omar Khayyam from the Victorians’ by Juan Cole in the Michigan Quarterly Review, for example.)

Shipping is $55 within the continental U.S.

Please contact me with questions or to request more photos. Thank you.