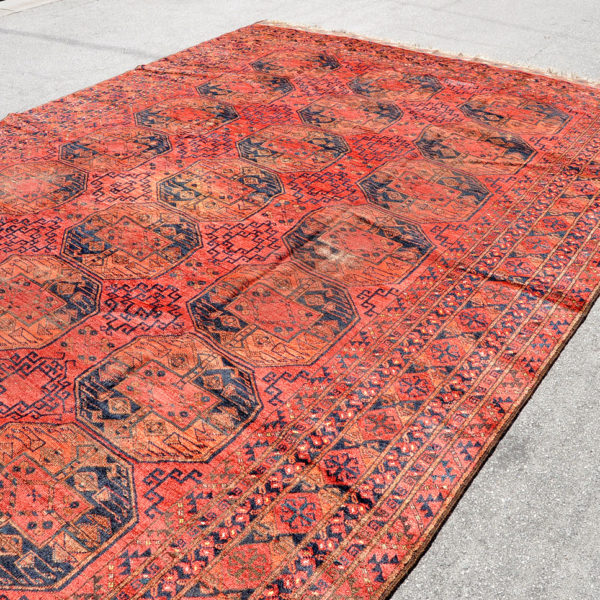 Marvelous antique Turkoman Ersari main rug in good overall condition, displaying a set of traditional gul medallions. As is true of almost all Turkoman rugs, it is woven from 100% natural wool sans cotton.

The rug has even wear and the modest area showing notable wear is captured in a closeup photo. No holes or weak spots and the rug can be used normally on the floor without real concern. A simple pad of some sort might be added underneath to buttress the rug as large Turkoman rugs, especially the older pieces, are clipped short by the weaver. Also, I would not recommend using it under a dining table with dragging chair legs or in an area of brutal foot traffic.

The rug was professionally washed at Artisan Fine Rug Care in Santa Cruz, CA– and has not been used since the cleaning. Dyes showed no issues with ‘bleeding’ and they appear all natural.

Side cords are in good condition with minor wear; the ends, showing some normal wear, are intact, including original kilim endings. The rug is not brittle nor is there any rot, odor or other serious issues.

Out of my personal collection but I’ve never had an appropriate place to use it. Woven in Afghanistan or Soviet Turkmenistan. Possibly late 19th century but more likely the early decades of the 2oth century.

Turkoman rugs are typically woven from 100% pure wool. They are a nomadic rug made by tribes in Turkmenistan, Uzbekistan, Afghanistan, and northeastern Iran. These tribes include the Salor, Saryk, Tekke, Youmut, Arabchi, Chodor, and Ersari tribes. These rugs tend to have a background that is red or redish-brown in color, and the motif is usually geometric.

Most Turkoman rugs feature the octagonal gul –either as large medallions or in a repeating array.

Shipping within the continental U.S. is $69.

Please email me with questions or to request more photos. Thank you.